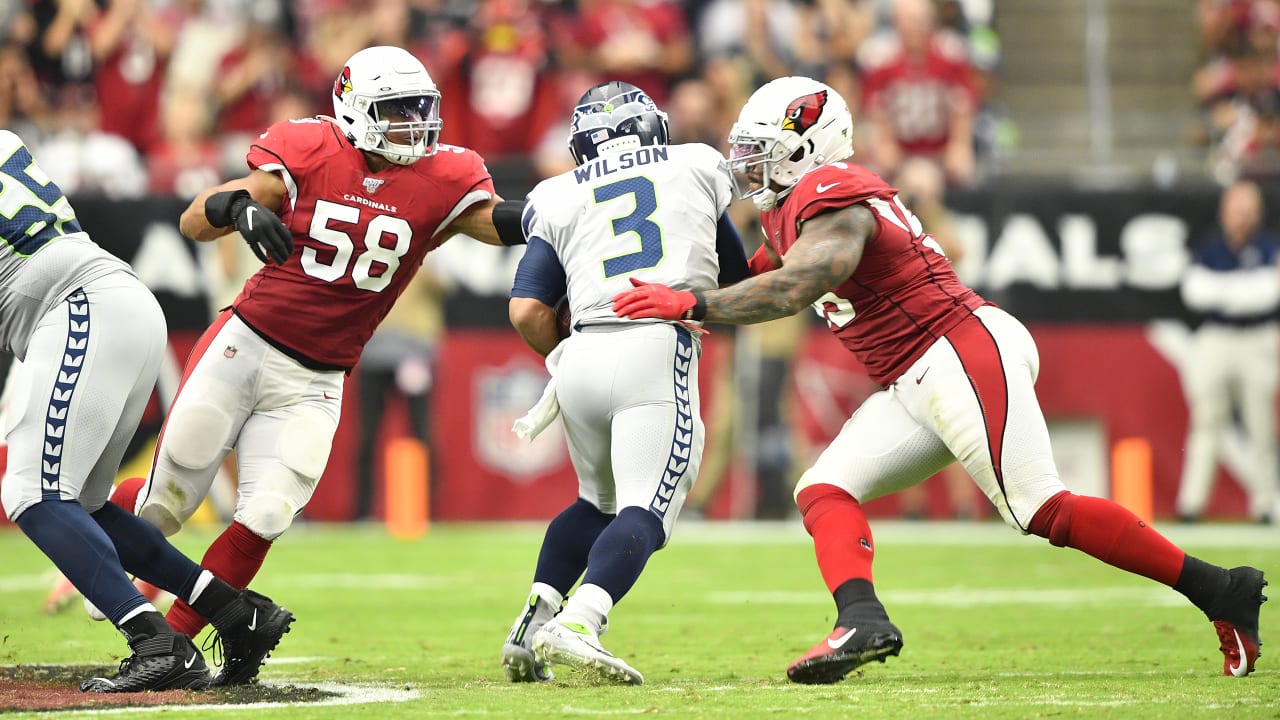 It made for a big day receiving for running back David Johnson (8 catches, 99 yards) but limited big plays. Fitzgerald needed two catches on the final meaningless drive to surpass Tony Gonzalez with his 1,326th reception – Fitz wasn’t much in a celebratory mood after, calling the winless month “depressing” – and to top it off, fellow wide receiver Christian Kirk was awkwardly tackled on a reception with less than 30 seconds remaining, bending his leg in a direction it was not supposed to go.

Kirk actually stayed in and made another catch before finally limping off with help, and now the Cardinals have to hope he doesn’t have a serious injury. Kingsbury said he did not yet know Kirk’s status.

The Cardinals actually average five yards a rush as Edmonds (6 carries, 37 yards) was integrated into the offense for the first time. But Murray also had the first pick-6 of his career, trying to lob a screen pass to running back David Johnson that was instead intercepted by Seahawks defensive end Jadeveon Clowney. Clowney raced 27 yards for a touchdown and a 10-0 lead.

“I tried to tip the ball and when I tipped it, it came right back to me, and I’m like, ‘Let me try and take this to the crib,’ ” Clowney said. “It kind of gave us a spark in the game.”

The Cards never really challenged after that.

“I probably should’ve thrown it in the dirt,” said Murray, who was 22-of-32 for 241 yards and scored his first NFL touchdown on a 9-yard run late in the game. “It was unfortunate.”

The defense still wasn’t great but it was better than the week before, safety Budda Baker said, although Baker lamented that the Cardinals have gone the first four weeks without an interception. The Seahawks (3-1) did get a touchdown pass to a tight end when Will Dissly grabbed one, although Dissly wasn’t as much of a problem as previous tight ends.

Tackling was an issue – there were a handful of times the Cardinals gave up unnecessary yards simply because the initial man on the scene didn’t make a play he should have – and while Russell Wilson didn’t pop any eyes with his stats (22-of-28, 240 yards, one score), he was never really pushed either.

Then the Seahawks answered Murray’s touchdown with a clock-eating, soul-sucking eight-minute drive for its final touchdown.

“Sailors aren’t made on calm water,” linebacker Terrell Suggs said. “You need a little bit of turmoil to identify your character and see how much fight you really have.”

Still, Suggs said, “when they put this team together, they didn’t expect us to be this late searching for our first win.”

The search continues next week in Cincinnati.