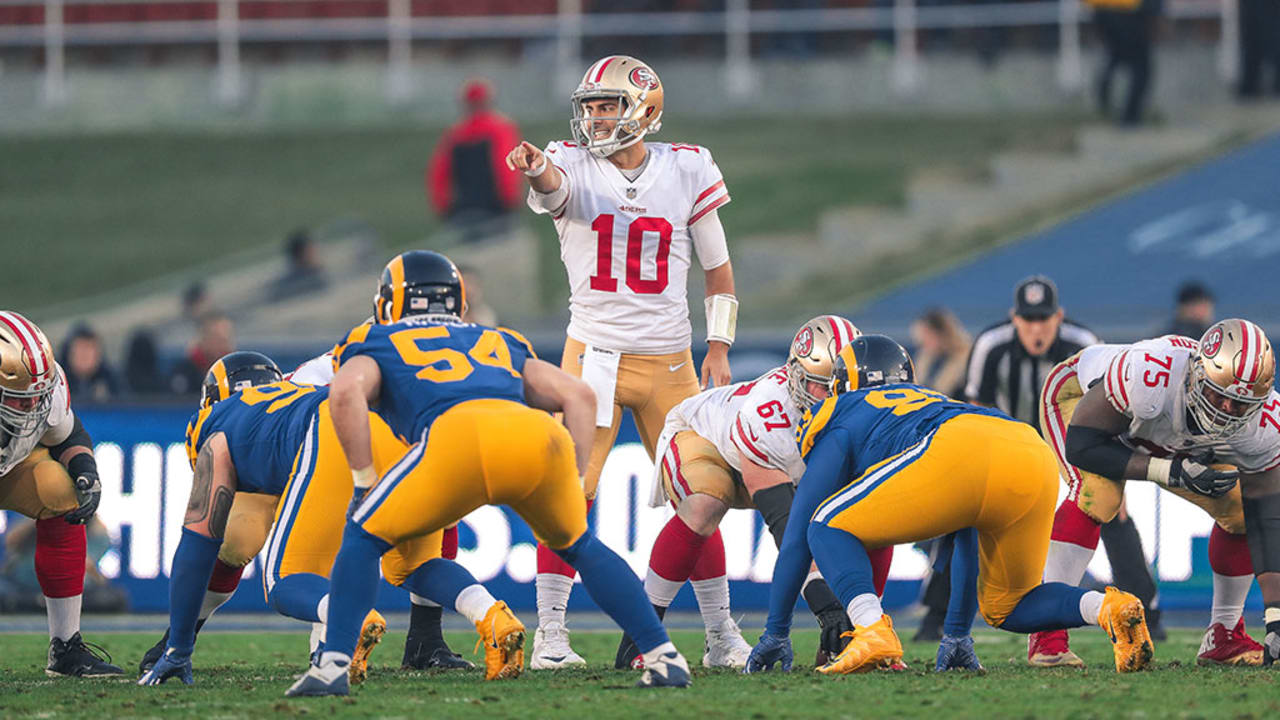 The San Francisco 49ers and their unblemished 4-0 record head to Los Angeles to face the 3-2 Rams in Week 6, their first divisional contest of the season. San Francisco looks to continue its undefeated streak to start 2019, meanwhile Los Angeles looks to make its way back to the top of the NFC West.

In this week’s Four Downs, we are joined by 49ers beat writer Chris Biderman. Biderman has covered the 49ers since 2013 and has been with the Sacramento Bee for two seasons. The native of Santa Rosa, Calif. graduated from Ohio State with a degree in journalism in 2011.

1st Down: What is the game’s best story line?

The 49ers open the season 4-0 for the first time since 1990. That’s a headline in itself, especially given the struggles this team has faced early on over the last few years. Despite the early success, many are still questioning “are the 49ers for real?” If Monday night’s win over the Cleveland Browns wasn’t enough of a statement, their divisional matchup against the Rams could be their biggest test to date. The Rams have had the 49ers number over the last few seasons. A win over the two-time defending NFC West champs would definitely answer what many are questioning about this team.

@ChrisBiderman: The start of a new NFC West rivalry

This is the first time these two teams have played each other with winning records since 2001. And you have to think Kyle Shanahan would love to take over Sean McVay’s wunderkind coach moniker. McVay (rightfully so) has become the most prized young coach in the NFL while going 24-8 during his first two regular seasons and appearing in last year’s Super Bowl. But McVay is a former assistant under Shanahan and the foundation of his offense was created by Shanahan during their time together in Washington. That makes for a great divisional coaching rivalry. The way these two teams play, with explosive offenses featuring good young quarterbacks, makes for a fun rivalry between the lines, as well. The NFL is better with good rivalries.

Despite the record, Jared Goff has put up back-to-back games of 395-plus passing yards. The Rams also boast an average of 28 offensive points per game, ranked fourth-best in the league. Los Angeles has a trio of wideouts who all have recorded 300-plus yards through five games in Brandin Cooks (325), Robert Woods (355) and Cooper Kupp (504). San Francisco’s defense has managed to limited teams to an average of 257.5 yards per game, second-best in the league. Richard Sherman and the 49ers secondary will need to keep the trend going against the Rams potent pass catchers and eliminate those big plays we know they’re capable of.

Tackles Joe Staley and Mike McGlinchey are huge losses. Two first-year players, Daniel Brunskill and Justin Skule, are hardly ideal replacements. That’s not to say they can’t be effective. Shanahan has done a good job designing a quick passing game to avoid putting Skule on an island over the past two weeks. But that becomes increasingly difficult with Brunskill, an undrafted player, making his starting debut on the opposite side. Complicating things further is the absence of Kyle Juszczyk, who’s an important fixture in the running game. The 49ers have built the offense around the running game, which means the offensive line will have to get good push against the Rams talented defensive front featuring Aaron Donald. Easier said than done.

@KeianaMartinTV: They win the turnover battle

The 49ers have 11 total takeaways on defense, seven of which came by the way of interceptions, tied for second best in the league heading into Week 6. On the contrary, San Francisco has given the ball away eight times through four games. Ball protection is crucial against a Rams team who is desperate to get out of their two-game losing streak. Just as much as maintaining the ball is important, so is capitalizing off of turnovers – something the 49ers struggled with in Week 5 against the Browns.

The defense continues playing at a high level. The Rams major weakness is their offensive line, which San Francisco could take advantage of with Nick Bosa, DeForest Buckner, Dee Ford and Arik Armstead all playing well early in the season. Jared Goff plays much better in a clean pocket, so pressuring him and generating turnovers (Goff has six interceptions and two fumbles in his last three games) will help out San Francisco’s injury-tattered offense immensely. The 49ers so far lead the NFL in opponents possessions that end in turnovers, so they appear up to the task. But LA’s offense is easily the best they’ve gone against yet.

Richard Sherman reminded you not to sleep on anyone in the NFL. That also included cornerback Emmanuel Moseley who got the start in Week 5 in place of Ahkello Witherspoon (ankle). Media and fans alike were apprehensive of the second-year cornerback going up against standout wideout Odell Beckham Jr.. However Moseley held his own allowing just one catch on three targets for seven yards. With San Francisco’s daunting pass rush, I’m doubling down on the young corner and projecting him to put the Faithful at ease and coming up with his first-career interception against Goff, who as mentioned above, has struggled with turnovers.

This one has all the makings of a low-scoring affair. The 49ers defense is playing lights out and is strong where the Rams are weak (in the trenches). The Rams could be without Todd Gurley as he deals with a quadriceps injury. San Francisco is without three of its best run blockers and have an inexperienced receiving corps. San Francisco’s secondary is playing well and finally matches up with the Rams talented receivers. Yes, Shanahan and McVay are known for their high-flying offenses. But this one should be a defensive slugfest. Take the under. Tags: ers over their