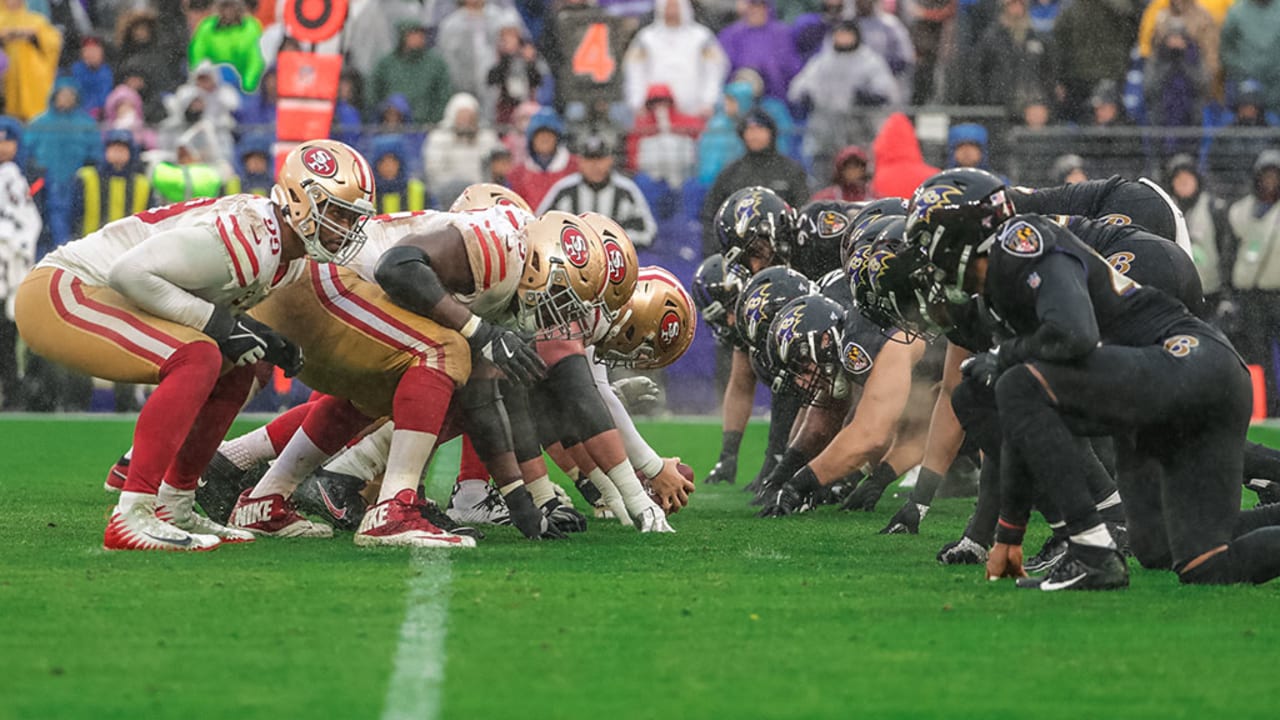 Kyle Shanahan on the 49ers fourth down play call in the fourth quarter:

“Just because of what the Ravens defense does in that situation. The same reason we did it early on. They’ve got too many people in there that you can’t block. I didn’t mind the decision at all of not running, but I wish I had called a better pass play.”

Shanahan on how the 49ers played overall in Week 13:

“I was real proud of the team. They played extremely hard all three phases. We definitely played against a real good team, but I was real happy with how the guys played. We had every chance to win the game, and we came up a little bit short at the end. Credit to them. Hopefully, we’ll earn an opportunity to get a chance to play them some other time.”

Shanahan’s message to the team postgame:

“Basically, what I told you guys. I’m real proud with how they fought. Our guys impress me every week with what they do. We had a lot of chances to win that game, but we came up short. It’s no one’s fault. Everyone did all they could. I’m excited about our team. Excited to go away for a week. We’re going to stay in Florida and get ready for New Orleans (Saints). I know our guys fought hard. I wish the game was still going on. It didn’t end the way we wanted, but we’re excited to get on the plane and spend the week together and get this turned around.”

Shanahan on Raheem Mostert‘s performance against the Ravens:

“I thought he was running great once he got in there. I saw a few of the runs he made. He was pressing it real well.”

TE George Kittle on the loss to the Ravens:

“I mean, losing is never fun. We play to win the game. I had a great time out there playing football though. It was awesome. We ran the ball a lot. I had a lot of good blocks with the tackles and ‘Juice’ (fullback Kyle Juszczyk). Our run game looked good. Unfortunately, we just didn’t do enough to get it done.”

Kittle on the spark Mostert brought to the offense:

WR Deebo Samuel on his touchdown:

“I had a double move, which we had scripted for man coverage, but they fell into a zone. I just saw the ball in the air. I didn’t worry about the defender and went and attacked the ball. It’s our job to see the ball with our eyes and our hands. So, I just followed the ball all the way in.”

“Honestly, I was just doing my job. My name got called, and I just went in to set the edge on (Mark Andrews). I saw Lamar coming. So, I tried to stay outside. When he went back inside, I was able to get my hand on the ball and rip that thing out. I kept my hands on (Mark Andrews) and not my shoulders so I could read Lamar to see if he was going to go inside or outside. By me keeping the edge, he went inside, and I got my hand on the ball.”

RB Raheem Mostert on his mindset following the loss:

“Absolutely, they are an AFC opponent. They have done a great job this year winning games and doing their part. Our offense was beating ourselves. It is not like they were beating us down. We were beating ourselves, and those penalties start to add up and get us out of field position. We just have to keep our heads up. You can see after the Seattle game we only lost by three points and this game we only lost by three points.”

Mostert on the encouragement of a close loss against a top opponent:

“Absolutely, we believe in ourselves, even when people outside the locker room don’t really believe in us and call us pretenders. We stick with what we got, and what we know we got, this locker room and this coaching staff. We know they are going to bring the best out of us. We want the best out of ourselves. We take it each day and we try to improve on the little things. We want to get to the playoffs and get to the Super Bowl, that’s our main goal.”

CB Richard Sherman on the lessons the team can take from the close loss:

Sherman on what separates Lamar Jackson as a quarterback:

QB Jimmy Garoppolo on what he can learn from the team’s losses this season:

“We are going to face adversity sometimes. I think guys responded well today. We need to make more plays in crucial situations, and that is what separates a lot of these games, a couple plays here and there.”

Garoppolo on what the 49ers proved in Week 13:

“It was a good challenge today. They are a good team, Baltimore, they definitely are. We just have room for improvement. Plenty of things we can do better. Whoever it is, wherever it’s at, we are going to line it up.”

Garoppolo on the performances of Mostert and the 49ers offensive line:

“They were battling up front, not just the O-line, the tight ends, Juszczyk and the receivers. Raheem ran great, all of the backs, it was a good effort and everything, we just have to make a few more plays.”

DL DeForest Buckner on how the defense handled Lamar Jackson:

“We made some adjustments during the game, trying to contain them more. Overall, I am proud of the guys. We played our tails off, just came up short. We have to focus on the little details in the beginning of the game. I feel like we did a better job in the second half. On that last drive, you have to make that play and get off the field.”

LB Fred Warner on the lessons he learned from Week 13:

“I’ve learned that we have a great team. It just comes down to us making those small plays in the clutch time. It could be plays made early in the game. That makes a difference. We’ve got to be cleaner. I feel like we just have to be better from the get-go, including myself. Silly mistakes happen. Once we got in the groove, I think you saw us settle down, but we’ve got to be better. We’re not going to hang our heads, we’re all competitors at the same time. We’re not going to take any moral victories. We didn’t win the game. We know we’ve got to be better; we’ll be better.”

DB Jimmie Ward on the defense’s performance against the Ravens:

“We gave it our all. They ended up making a few more plays and came out with the win. They ended up putting some points up in the first half. Second half, I feel like we tightened it up, and it was a close game.”