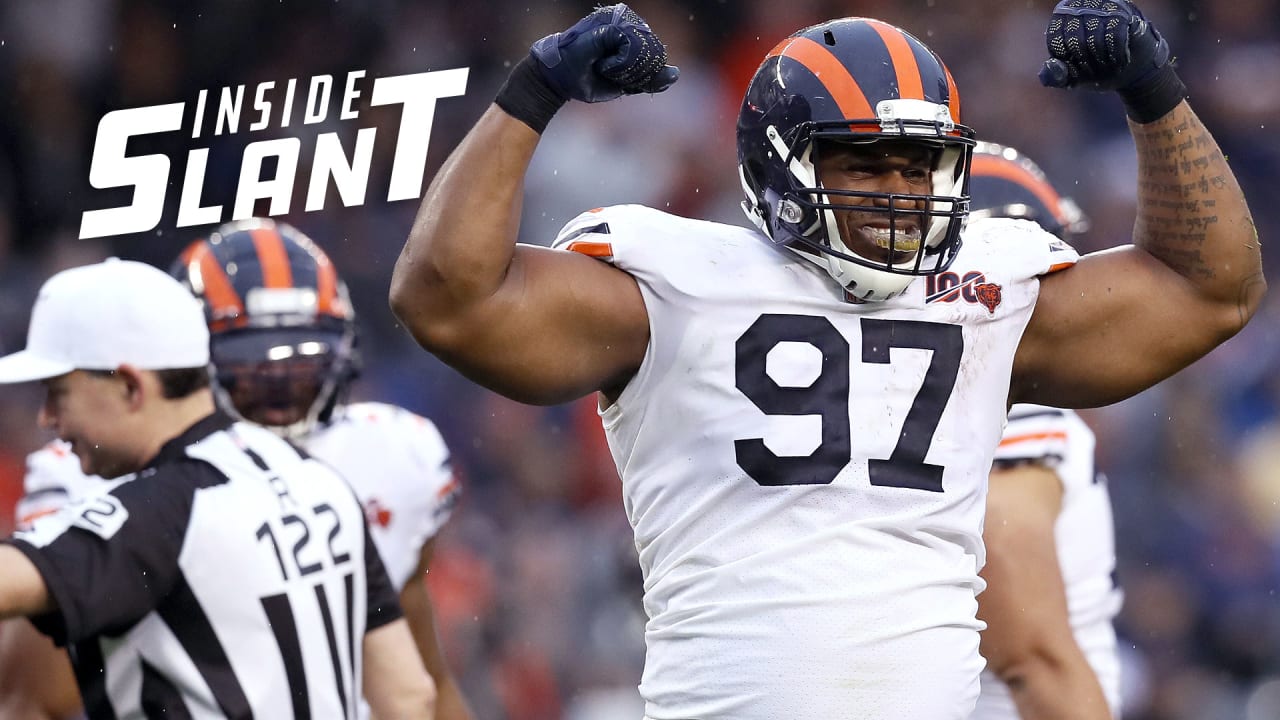 “Our guys, they just stick together,” said coach Matt Nagy. “We all care about one another. When you have that between coaches and players that trust each other, you get games like this.”

The Vikings tried to get Cook the ball early and often. The running back was continually met at the line of scrimmage, frequently by a player who didn’t start for the Bears in Week 1.

The three erstwhile reserves on the defense accounted for 20 tackles, five tackles-for-loss and 4.5 sacks, not to mention one forced fumble and one recovered fumble–on different plays and by different players.

It’s probably inaccurate to call Roy Robertson-Harris a reserve. Robertson-Harris was a valuable reserve in the first two games of the season and caught Aaron Rodgers to record the team’s first sack of the year. Pushed into starting duty after Bilal Nichols broke his hand against Denver, Robertson-Harris delivered one of his best games as a pro: three tackles, two tackles for a loss and 1.5 sacks.

In the third quarter, on a third-and-eight for the Vikings, Cousins dropped back to pass. As the pocket collapsed, linebacker Khalil Mack caught hold of the quarterback’s arm. As Mack fought for a better grasp, Robertson-Harris bull-rushed in to take Cousins to the ground.

What was going through Robertson-Harris’ mind on the play?

On the other side of the defensive line, Nick Williams has been a brewing story for weeks. The Alabama native was out of the NFL for a full season in 2017 before resurrecting his career with the Bears. He recorded his first career sack against the Broncos, then another against the Redskins. With Akiem Hicks a game-time decision, Williams was on-call for much of the week.

In his first start of the season, he had seven tackles, two sacks and recovered a fumble caused by Mack on the first play of the second half.

“We’re feeding off each other and feeding off the fans,” said Williams. “Everybody wants to get to the ball. We want to be a dominant defense.”

There’s something to be said about a defensive line that can lose two-thirds of its starters, one of whom is a Pro Bowler, and turn in one of its best performances of the year.

“It’s the preparation that (defensive line coach) Jay Rodgers gives us throughout the week,” said Williams. “We have a great game plan going into it. If we execute at the level we can play, then we’ll be successful.”

Nick Kwiatkoski was the final addition to the starting lineup against the Vikings. The inside linebacker found out that he’d be starting in place of Roquan Smith, who sat out due to a personal matter, only a few hours before kickoff.

For the former fourth-round pick, who has spent all of his four-year career in Chicago, the short notice is a part of his job description.

“I’ve been here a while,” said Kwiatkoski, “I’ve seen it happen before. That’s why you come in prepared each week like you’re going to play because you never know what can happen. Next-man-up mentality with injuries is part of football. Things happen.”

Kwiatkoski was a part-time starter for his first two seasons in Chicago, starting 13 games over the two seasons. After the Bears selected Smith with the eighth pick of the 2018 draft, Kwiatkoski became a full-time reserve.

With the opportunity to start again, Kwiatkoski made about as big a statement as he could. The linebacker led the team in tackles with nine, including a strip-sack that resulted in a 19-yard loss for the Vikings. Kwiatkoski’s skill as a pass rusher paid dividends late in the game, when his bull rush drove Cook into Cousins, breaking the pocket and setting up Williams’ second sack of the night.

Sunday’s game proved to be a statement game for the Bears. Injuries may come, but the Bears have the depth to take more than a couple of body blows.

“We have so many guys,” said Mack. “We’ve got double Nick [Williams and Kwiatkoski], Chase [Daniel] stepping in there. We’ve just got so many guys jumping in there doing their job. That’s all you can ask for.” It contains a list of 21,000 + micro niche keywords in just a few clicks.
Micro Niche Keywords Clean Up, Speed Up and Optimize Your PC In Just 2 Clicks. #1 PC Cleaner
Clean up Your PC