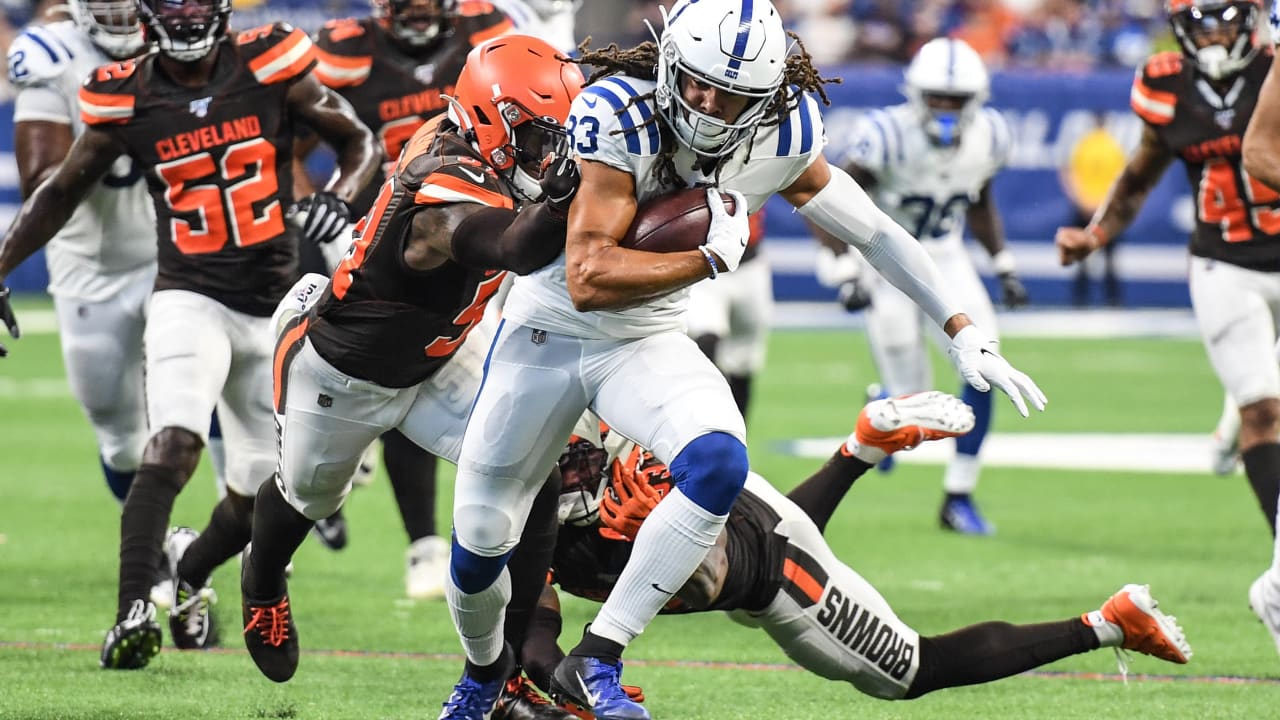 Hogan initially raised some eyebrows heading into the 2017 season as a local kid from a small school trying to make his way on the Colts’ practice squad. The Warren Central High School product was an absolute stud at Marian University in Indianapolis, where he established school records in receiving yards (4,935) and receiving touchdowns (42), while ranking seventh all-time in NAIA history with 263 career receptions.

Hogan participated in the 2017 NFL Scouting Combine, but would go undrafted. He was initially signed out of college by the Arizona Cardinals, who then released him right before the start of the regular season.

Hogan was signed to the Colts’ practice squad two days later, and in about three weeks he’d be promoted to the active roster. Unfortunately, in Indy’s Week 5 matchup against the San Francisco 49ers, however, Hogan, playing in just his second regular season NFL game, suffered a season-ending knee injury.

He worked all the way back last offseason, only to be placed on IR once again just before the start of the regular season. After being waived from IR, Hogan was signed to the Colts’ practice squad on Oct. 19, where he remained for the rest of the season.

This time around, however, Hogan has taken full advantage of being fully healthy from the start of the offseason program. And while the Colts have typically envisioned utilizing more traditional smaller-body guys like Chester Rogers or Parris Campbell as their slot receivers, the 6-foot-3, 217-pound Hogan has added a completely different element to that spot once he gets his chances in practices and preseason games.

“Not a lot of teams use big slots,” Hogan said. “But every time a team goes to nickel and they put a cornerback in there, it’s a mismatch; or if a ‘backer tries to come out there then it’s a mismatch for speed. So no matter who’s guarding me in the slot — that’s primarily where I’ve been playing — I just try to use that advantage the best I can and get the win.”

Hogan’s been able to produce in the Colts’ first two preseason games against the Buffalo Bills and the Cleveland Browns, logging two receptions in each game for a combined 61 yards — an average of 15.2 yards per reception.

But he said he’s hoping to ramp it up even more over the next two games to make the decisions at wide receiver even harder for head coach Frank Reich, general manager Chris Ballard and their staffs.

“Just be a playmaker, really,” Hogan said of his goals over the final eight quarters of the preseason. “That’s always, I think, the mindset of a receiver. Just be a playmaker, and I want to get some YAC (yards after catch). I still haven’t got to get that catch and really break away from a couple guys, so I definitely want to do that. And get in the end zone — I’m still waiting for that. So I want to find myself in the end zone with the ball in my hands and celebrate with my team.”

For his part, Reich is looking forward to seeing how Hogan can continue taking advantage of his opportunities.

“Krishawn’s does very well,” Reich said Tuesday. “Very consistent, very smart, really good hands, makes all the tough catches and he’s been productive. So he’s doing everything he needs to do to make himself relevant in this competition.”