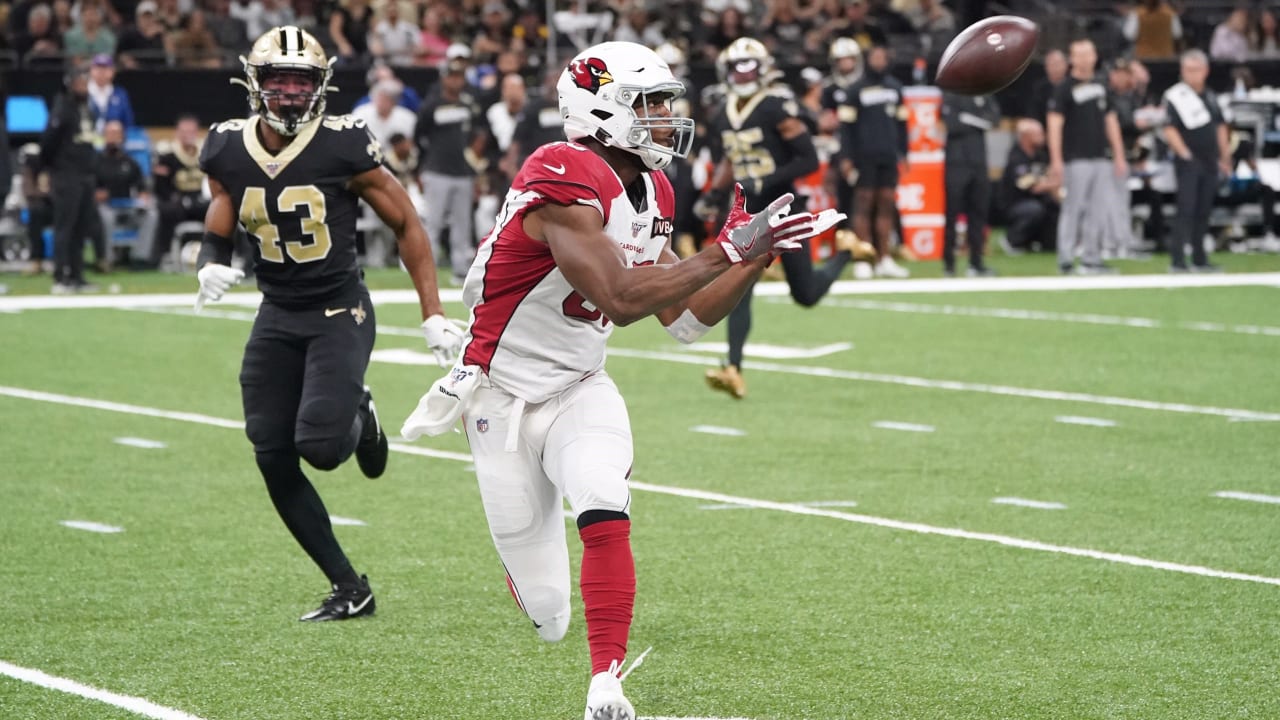 If Edmonds can’t play, the Cards would be down to Alfred Morris and Zach Zenner – both of whom signed last week – as their running backs. Morris was inactive Sunday.

Perhaps Kingsbury and the Cardinals would feel better about that situation had the rest of things gone better against the Saints (7-1). Perhaps it would’ve been better had they gotten that first down in the third quarter.

Cornerback Patrick Peterson had gotten his first interception of the season to short-circuit a Saints drive, one of the few mistakes of the day by Brees.

Trailing 10-6, Murray’s play-action rollout was defended perfectly by the Saints, with defensive end Cam Jordan getting between he and Edmonds to force and awkward throw and incompletion. On fourth down, Edmonds’ try into the line went nowhere, and the Saints got it on the Arizona 30.

“I’ve got to find a way to get that yard,” Edmonds said.

The Saints scored a touchdown on a 15-yard pass from Brees to running back Latavius Murray five plays later. The Cardinals later cut the lead back to seven with a field goal, but the game felt like it had changed for good.

“It was loud and we were trying to communicate across and it got messed up,” guard Justin Pugh said. “I just know I got blown up and didn’t do my job on that play. One of 11 not doing their job on the biggest play of the game is definitely not a good thing.”

Kingsbury said with “analytics, plus myself, I was all for” going for it.

“We felt like at that point, after getting the turnover, we had to make something happen,” Kingsbury added.

Brees finished the game completing 34-of-43 passes for 373 yards and three touchdowns, without being sacked. Michael Thomas had 11 catches for 112 yards and a score, and Latavius Murray had 102 yards rushing and another 55 yards on nine catches.

“He’s a Hall of Fame-caliber quarterback, so what else do you expect?” linebacker Jordan Hicks said. “You’ve got to play honest, disciplined defense against that scheme. We had a really good plan, but … we had opportunities, we didn’t execute as we needed to.”

Kyler Murray completed 19-of-33 passes for 220 yards, and did it without a turnover again. But there were ones he wanted back – on one fantastic play in which he spun to elude a rusher, he had Christian Kirk on a broken play some 40 yards downfield, only to underthrow the pass. Murray did throw a nice fade to Fitzgerald in the end zone in the first half for a near score, but Fitzgerald couldn’t quite get his second foot down.

The Cards settled for a field goal. It was the first time this season the Cards did not score a touchdown in a game.

The Cardinals only converted 2 of 12 third downs, and were 0-for-2 in the red zone. In a game where the Saints got touchdowns, it was a bad ratio.

“For the most part, we moved the ball,” Murray said. “We just didn’t finish.”

Kingsbury again noted Murray took care of the ball, and blamed himself for some bad playcalls in the red zone. But said his quarterback is still showing progress.

“These are great lessons, playing one of the best teams in the league on the road,” Kingsbury said. “He’ll learn from all of it.”

The Cardinals hope to as well, although the timeline – with the 49ers coming Thursday – is tight.